I had my first school mom screw-up today. 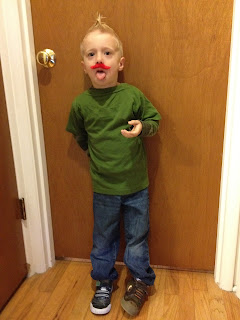 If you’ll notice, my sweet preschooler is wearing different shoes, a backwards shirt, a red mustache, and a mohawk.  This is how he went to school… on pajama day.

Newsletters are sent via email these days.  No longer do you get cute orange paper with a pumpkin and a scarecrow on the front containing information about the month.  When there is an early release day… or when there is no school… when it’s PJ day… you know, stuff like that.

My preschool mom friend Nancy sent me a text  at the beginning of the week and asked me if Baylor was going to wear PJs for Wacky Wednesday.  I sent her back a big question mark and so she told me there was something about wearing weird things on Wednesdays until Halloween.

Because Nancy did not want her son to be the only one to wear PJs to class, I told her Baylor would too in case everyone else forgot.  We’d be in this PJ day together.  I ran downstairs to the laundry this morning and found some semi-clean jammies and brought them to Bay to remind him of the fun day.  He was not having any part of wacky Wednesday PJ day.  Ok, well, we’ll just do some of the other crazy things that the newsletter said!

After Nancy’s text the other day, I pulled up the newsletter that had been lost in the sea of junkmail, and read about the Wacky Wednesdays . It read, “we will be doing wacky Wednesdays where the kids will come to school wearing PJs, weird hairstyles, and backwards clothing!” I did not happen to notice the side panel where each of the Wednesdays was assigned only ONE of those themes.

We walked into school with a red mustache, a mohawk, a backwards shirt, and mismatched shoes to a classroom full of kids in their jammies.  Today, just today, was wacky Wednesday PJ Day.

“WOW!  BAYLOR!  COOL MUSTACHE!  HOW DID YOU GET THAT ON?!”  Kids were literally vibrating with excitement when they saw his ‘stache.  He felt cool.  It was awesome.

Um, that poor mom, she totally missed the whole point and thought the days were combined.  Is what I imagine the teachers were thinking.  It was not awesome.

Feeling like a loser mom, I dashed back to my car and drove the three blocks to our house.  I found the jammies he had denied, and one of the shoes that would match one of the ones he was wearing.  I went back to his classroom, hit a car on my quick park job and ripped off the back panel of my bumper, and explained to his teacher that he had totally declined the PJs but still wanted to be wacky, which is why he was all done up.  I told her that I’d just put the PJs in his cubby in case he felt left out and wanted to change.  Blame it on the kid…

I picked him at 1pm.  He was in his jammies. 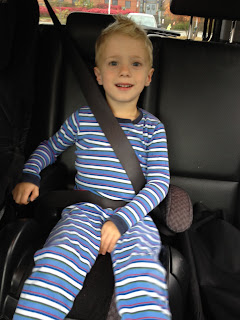