It’s funny talking to other parents about their kids.  I suppose I’ve done the same things, and only now that I’m a few years into this whole thing do I have a point of reference for topics of conversation.

I was chatting with a a mom at a park and she was telling me that her almost two-year-old is going through a phase where he only says, “NO!”  Yep… been there.  And I will not say, “just you wait.” Because that is real annoying.

“She’s a really easy baby…”  about his three-week-old that really only sleeps, let’s be real.

Another mama told me her daughter was heavy so she was having trouble pulling herself up and is thinking that she’ll be slow to walk.   “Don’t you think?” She had asked.  Yep.  You’re probably right, but I’m glad you had a light bulb moment and ain’t nobody gonna take that away from you.

“He’s almost 18 months and I think he only needs one nap.”  Totally right.  Read one of the million books about it… but no, I mean, you totally discovered this.

We bring up these topics to share and to validate what we are doing.  We, the parents, still maintain some sort of control and by keeping up with development as if it’s the first and only time it has ever happened in the history of babies, we feel like we’re really on to something.  New discoveries proven true by children or other parents make us feel frickin’ awesome.

Nobody, and I mean NOBODY told me about three-year-olds.  I had heard about the terrible twos but I’m not really sure what was so terrible.  Yes, they are challenging mostly because they can talk and tell you what’s up.  But for the most part I think two-year-olds are funny and pretty sweet (ok except for this one kid I know… he needs a leash, so except for him).

Visiting with parents of younger children, I listen to their “discoveries” and realize I did the same thing.  The first time it happens to you, you want to share it and it feels so new.  These kids change so quickly it’s hard to catch up.  So if you are reading this, and have a child older than three, you can say, “yep, they are assholes at three and I’m sorry nobody told you.”

My mom told me that it’s the kids who never throw a tantrum in any way are the ones we should worry about and that having a strong willed kid is a great thing!  Then why don’t you come hang out with him… 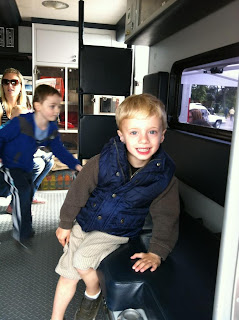 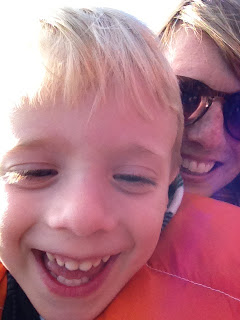 It’s not all bad.  This stuff out his mouth has me laughing harder that I’ve ever laughed before.  I’m training him to remind me about things… we drove by a hair salon the other day and he said, “Mom, don’t forget you need a bang trim.  But I really like your bangs so don’t get them too short.”  Serious?

As sweet and funny as he is, it seems that everything is up for negotiation now.  He won’t take a nap – in his crib – only on my chest on the couch.  What a great habit to start.  Bed time has become a dreaded torturous event in which Baylor genuinely believes he will be harmed if he is placed in his crib and told to lie down.  End of the world.  For real.

The other day he woke up from a long nap and I brought him out to the living room.  I set him on the couch and he just SCREAMED and screamed.  He wouldn’t let me sit near him, touch him, talk to him, nada.  I lay on the floor and he slumped off of the couch and down to me.  Thinking he was coming to cuddle, I reached out and that’s when he kicked me in the stomach.

Hysterical, he cried and then ran to his room and slammed the door.  I tried to go in and he screamed more and backed away from me like I had a whip.  I crouched to his level and told him to calm down and take a deep breath.

He looked me right in the eyes, screamed as loud as he could, and then slammed the door.

He’s had tantrums before, not huge ones, not ones where I can’t calm him down.  But this one, well, you can see for yourself.

I finally went into the kitchen, turned on a little Amos Lee and unloaded the dishwasher.  After ten minutes I felt a little tap on my leg and a calm baby reached out for a big hug.  I scooped him up, kissed him hard, and we went about our afternoon.  Later, I told him he can always talk to me and that it’s ok to scream if you really need to, but talking is better.

I started thinking about these kids.  Unable to regulate their own emotions and grasping for any control they can conquer – no I will not nap; no I will not eat; no I will not sit down.  He’s shy until it’s time to be the center of attention, he’s sweet as a gumdrop one minute until something unexpected happens and then it’s Meltdown City to the fullest dramatic notch.  I swear this age is full of little actors.  I should start an award ceremony… hmm, birthday party idea.

I’m reading books on positive discipline,  and one called “your three-year-old: friend or enemy” which makes me laugh and feel comforted all at the same time.

Strong willed?  For sure.  Completely irrational and testing his parents at every chance he can?  Yep.  Will I laugh about this and give him material to brag about when he’s older?  “I used to throw epic tantrums when I was little….”  I think so.

I’m tired, emotionally drained and ready for tomorrow.  Nobody told me about the challenge of almost-three-year-olds, but nobody told me it was going to be easy either.