The highly anticipated release of Rogue One: A Star Wars Story was always predicted to break records, but with its December release, the movie subtly did something else remarkable that’s rare in Hollywood films: It gallantly arrived with one of the most racially diverse casts ever seen on screen. The action-packed film features British actress Felicity Jones as a female lead, along with British-Pakistani actor Riz Ahmed, Mexican actor Diego Luna, and Chinese actors Donnie Yen and Jiang Wen (to name just a few). And make no mistake, that’s a big deal — especially considering the numerous whitewashing controversies that have swept Hollywood over the last year or two.

In Rogue One, Diego Luna plays the role of a Rebel intelligence officer named Captain Cassian Andor, and made the decision to keep his natural accent.

“It was very demanding,” Luna told Esquire. “And for me, also, working in English requires so much of my attention, no matter how small the scene is. Every day, at the end of the day, my brain is fried.”

But the hard work definitely paid off — and not just in box office sales. Earlier this week, the actor tweeted a touching note from 27-year-old fan Perla Nation, who shared a story on Tumblr about how she insisted on taking her father — a landscaper who migrated to the United States some 30+ years ago — to see the movie for one simple, yet powerful reason.

“I wanted my Mexican father, with his thick Mexican accent, to experience what it was like to see a hero in a blockbuster film, speak the way he does,” wrote Nation.

The experience wound up touching her father in ways she never quite expected expected:

” … although I wasn’t sure if it was going to resonate with him, I took him anyway,” Nation continued. “When Diego Luna’s character came on screen and started speaking, my dad nudged me and said, ‘He has a heavy accept.’ I was like, ‘Yup.’” 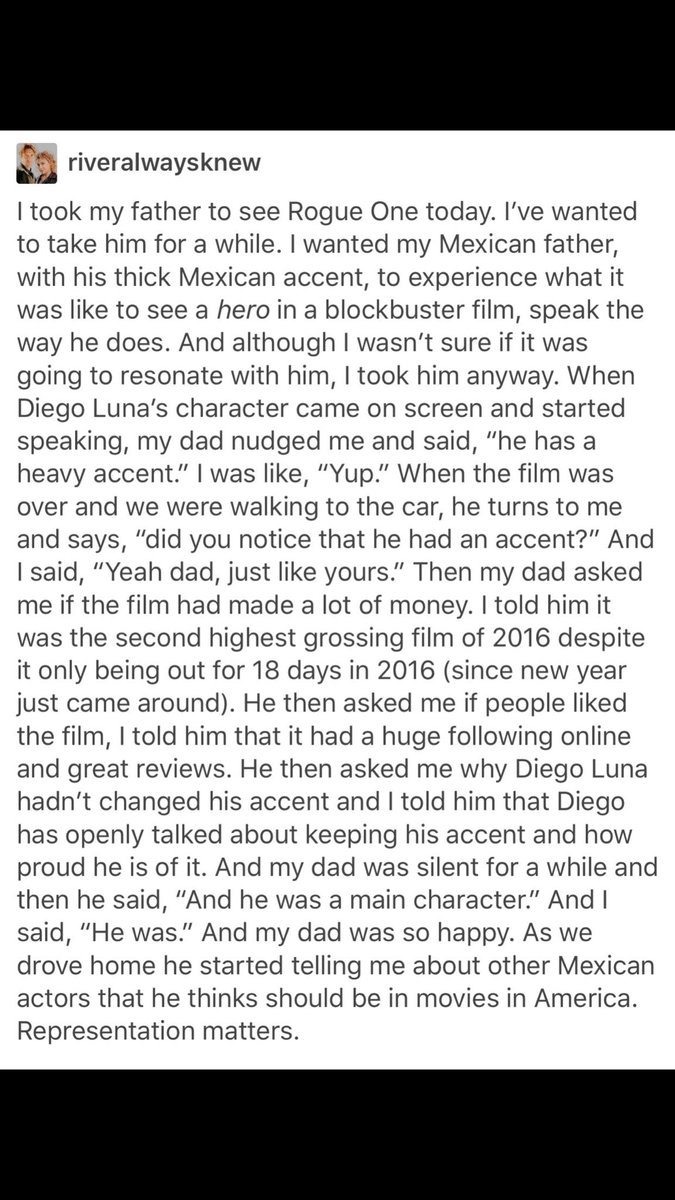 After the movie ended, Nation says that her father was bewildered (and then proud!) to learn that the movie was currently #1 at the box office — a movie that starred a Mexican actor with a substantial accent. Just like his.

“When the film was over and we were walking to the car, he turns to me and says, ‘Did you notice that he had an accent?’” she continued. “And I said, ‘Yeah dad, just like yours.’ He then asked me why Diego Luna hadn’t changed his accent and I told him that Diego was openly talked about keeping his accent and how he was proud of it. And my dad was silent for a while and then he said, ‘And he was a main character.’ And I said, ‘He was.’ And my dad was so happy. As we drove home he started telling me about other Mexican actors that he thinks should be in movies in America.”

Diego Luna shared a screenshot of the post on Twitter Wednesday, along with a caption saying, “I got emotional reading this!”

And honestly, I did too.

This story is such a perfect example of how impactful the power of representation in films is. My husband and son are huge Star Wars fans ourselves, and have seen all of the prequels and sequels, accompanied by lengthy (yawn stifled) analysis of the various tangents the series takes. After my own 8-year-old son saw Rogue One, the first thing he said to me was, “There was a brown pilot in the movie and he was a HERO, mom.”

My husband also said it felt bizarrely delightful to see a Pakistani man in his beloved Star Wars series. But of course, it was my son’s reaction that got me the most emotional. Because in that moment, he clearly realized he had a need to identify with an action-hero that looks like him. And he didn’t even know it.

I remember when that happened to me; I was 26 years old when I first saw Mindy Kaling on The Office and it was so incredibly inspiring to see a brown girl that wasn’t typecast, but instead that spoke like me. (Well, I mean minus the ridiculous Valley Girl part, but you get the idea.) It’s important when characters aren’t simply cast because there’s a slot open for a minority actor, and they happen to tick that box. The character of Mindy Kapoor could have been played by a girl of any race and still worked beautifully. But the fact that they cast a brown girl gave me a sense of pride without the cringe-inducing stereotypes. And seriously, it’s such a rad feeling to know that my son was able to experience this feeling at such a younger age than I was.

The need for an authentic representation of who we are as a people is increasing all the time, as the world we live in becomes more and more racially diverse. We often talk about how our kids need to see more diversity in the shows they watch and the books they read; but the truth is, the power of representation impacts us all, no matter our age. The media we watch can’t help but influence the way we think and feel and ultimately perceive the world. And seeing real faces — our faces — in starring roles inches us closer to a diverse world on screen that more closely resembles the one we truly live in.